It's everything you need to feel rejuvenated and recharged. Plus get a FREE undated Wellness Calendar when you subscribe.

I never watched Dr. Oz before but the television was on that channel when his show came on, and before I could turn it he began speaking about natural remedies that will leave our bodies feeling happy and energized. I kid you not when I say that I not only watched the entire episode, but I also set my DVR to record every episode from now until kingdom come.

It felt as though he was speaking directly to me as I’d been suffering from everything he was mentioning. I had found my salvation. And to top it off the best thing about these remedies is that they are simple and take less than 10 minutes to do.

SHORTNESS OF SLEEP OR INSOMNIA
To aid you in getting a full night’s sleep Dr. Oz recommended pumpkin powder. He stated that pumpkin seeds have zinc and the amino acid tryptophan. When ingested the tryptophan is released and the zinc converts it to serotonin which tells the brain relax allowing you to get a good night’s rest. Just add 1 or 2 teaspoons to warm milk 30 to 60 minutes before you go to bed and you should have no problems getting a full night’s sleep.

ACHES AND PAINS
If you don’t want to take pills for your knee or back pain etc Dr. Oz spoke about the arnica plant. Its has a compound in it that fights inflammation. As someone who has arthritis in both her knees my ears perked up on this one. There’s a product called arnica gel. You rub it on like you would icy hot and it will make your pain go away…notice I said pain, not the arthritis. Too bad.

UPSET TUMMY
Have an upset stomach? Try fresh ginger or ginger tea. Chop up the ginger and add it to a hot cup of water or simply buy ginger tea bags and drink. That’s it! Dr Oz states, this will speed up digestion and its also an anti-inflammatory. I’m not a fan of ginger, especially those ginger candies but I’d be willing to give this a try.

STRESS! STRESS! STRESS!
Stress is something we all deal with and apparently yoga is the cure. Funny, I thought it was wine. Dr. Oz’s “yoga guy” Steve Ross said, getting into the ‘seated forward bend’ position is like a sedative for the nervous system. By getting into that position and holding it for a minute or two, combined with slow deep breathing it will get you in a relaxed space. If you are a novice at yoga like me I took the liberty of showing you the position. 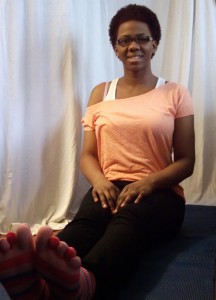 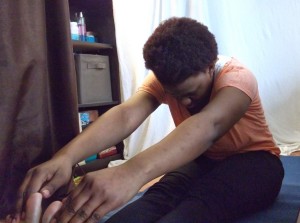