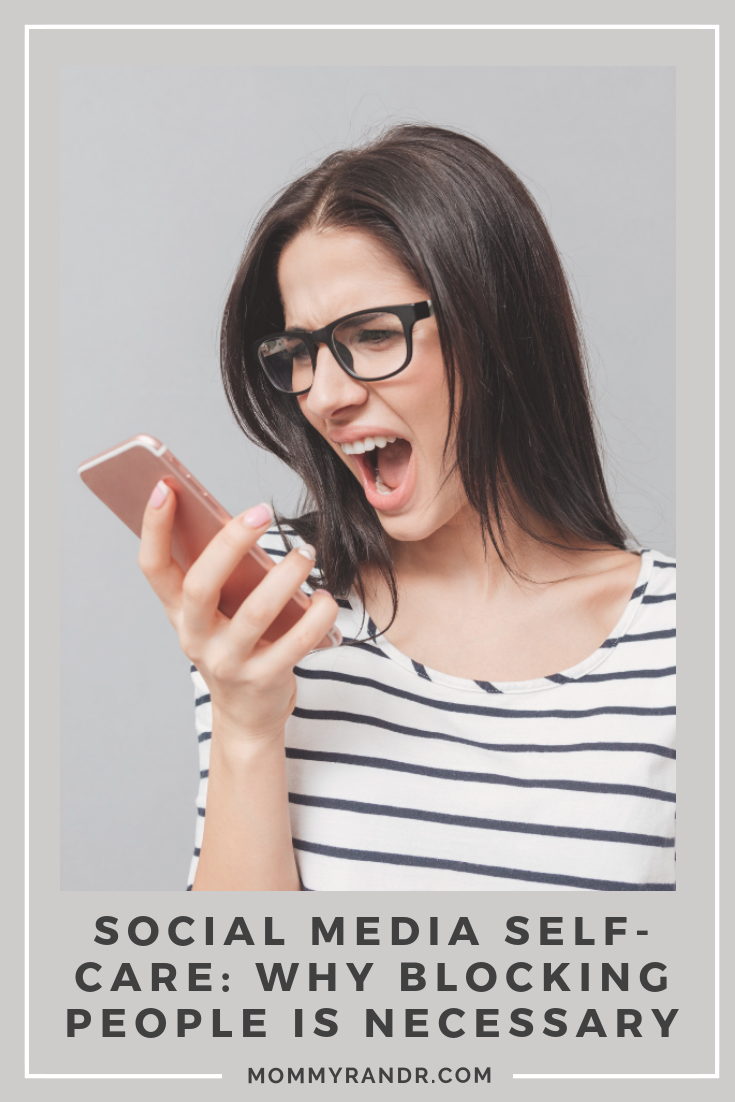 When I first got on social media I didn’t think of myself as someone who would block people. Back then I didn’t find it necessary and honestly, I thought it was a bit excessive. This was probably because I didn’t see any shit on my personal Facebook page that would give me a reason to block anyone.

But when I started a public Facebook page (long before this blog was born) I quickly became aware of the negativity that can make the internet a not so fun place to be. You’d be surprised what people would say to me in response to parenting memes and other things I shared. Usually, I would ignore them. But if it got too bad I found myself having to block them.

At first, I would feel a little guilty and told myself I shouldn’t take it personally. Then I thought, fuck that. I created this space for moms to chill and enjoy. I’m not gonna let these Debbie downers and trolls ruin my shit. So it didn’t take long for me to start using the block button more frequently, and guilt-free.

Today, unfriending and blocking people is my favorite form of social media self-care, and it should be yours too.

Protecting my space on social media

While I may not be able to control the world around me I can control what pops up my timeline. And since I’m all about happiness in all areas of my life I make sure my timelines have a positive reaction on my mental and spiritual health.

I don’t come on social media to argue with ignorant people stuck in their ways. I don’t have the time nor patience for that. Instead, when I log on I want to consume information from accounts that are going to give me educational and spiritual nourishment.

So, yeah, this might mean you’ll have to unfriend or block relatives and friends or unfollow someone. Will they like it? Will they understand why you’re unfollowing or blocking them? Probably not. Why? Due to the ease of social media access, people often get upset or even angry when the access they once had to someone becomes restricted. But you see, I no longer care about how people feel when I deny them social media access to me. My feelings as a result of their post matter more, it’s as simple as that.

I know not everyone is cut and dry so if blocking is too severe there’s always the mute option. Muting is great because it allows you to remain friends with someone while keeping their content from appearing on your timeline. They also have no clue they’ve been muted.

What are some reasons for blocking people on social media?

You may not want to see posts from certain people on your timeline for any number of reasons like:

No decent human being wants to see that shit on their timeline. I don’t care if it’s your favorite Aunt Alma who makes the best apple pie. Fuck that shit cause there’s no excuse for it.

There’s always one person who should scroll past things they don’t agree on but instead will leave an antagonizing comment in the hopes of provoking a comment war.

If someone is in your comments with weird comments and emoji’s or if they’ve sent you an unsolicited dick pic they should most definitely be blocked and reported.

If you’re Facebook “friends” with someone whom you haven’t spoken to since friending them or nothing about them rings a bell. You should totally let these people go if you have no shared friends.

There’s always that one person who’s always sharing something you always feel like you have to correct despite them having all of Al Gore’s internet at their fingertips to fact check.

I consider all my social media channels my peaceful corner of the internet. I protect that peace at all costs which is something that I hope you’ll do as well.

What are your thoughts on this form of social media self-care? Is it something that you do or something you’re gonna start doing?