The week of July 4th marks the 2nd year anniversary that me and my best girls took our first ever mommy vacay. We took an overdue week long, yes a WEEK LONG vacation to the always sunny and sexy South Beach, Florida. I talked about the planning of this trip in the previous post “Tips To Planning A Mom Trip” but I didn’t talk about the trip itself.

With the combination of its warm beach, year round summer weather, Latin themed music, food and overall vibe I embrace South Beach as if I’ve left the U.S for a whole nother exotic destination. Which is why it was the perfect destination for us. It was close enough to be gone but felt as if we were farther away than we actually were.

This was trip how many years in the making and from its inception the goal of the trip was to “party” like we were in our 20’s. To be wild and carefree. But what went on was something that no one could have predicted. 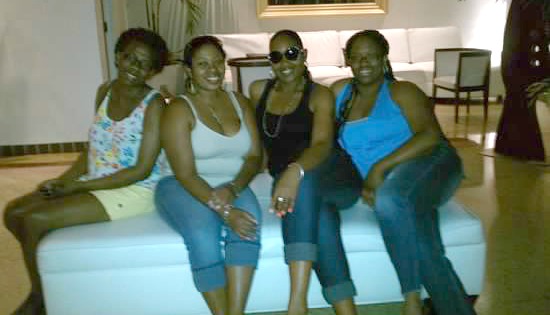 Over the course of a week we ate, walked around, (they) got tattoos, I tanned, we talked and joked about any and everything under the sun and slept. All that party like a rock star talk, was just that…talk. And we weren’t the least bit sad about it as we ended up doing what our bodies really wanted us to do and that was….rest. The trip as a whole is now a blur but here are the things I do remember and will find impossible to forget:

One day we decided to work on our tans by laying out on the beach and swim in the ocean. That never happened. One by one we put on our headphones, opened books and promptly fell asleep. I don’t know how long we were asleep but I can tell you we were grateful that we weren’t sunburnt. Truthfully if weren’t serenaded out of our dreams by a man with a guitar, we probably would have been. I can’t remember the words to his song, as he was making them up as he went along but it was something along the lines of, “four beautiful brown girls getting a tan…” maybe we would’ve heard his song more clearly if we weren’t trying to wipe the drool from the corners of our mouths.

Then on July 4th we decided to get dressed up and head down to Ocean Drive to see the fireworks. They were right on the beach and were beautiful! That was the highlight of our evening. We should have packed it up right then and there and went back to the room had we known what we would have encountered immediately afterward. The goal was to get drinks at Wet Willie’s. As many time as I’ve been to South Beach I’ve never been but I had heard all about it. I personally prefer Mango’s. Wet Willie’s is supposed to be the be place to go when in South Beach. So I was excited until we had to wait for a table for over an hour, pay the bill upfront with tip included (I’m still puzzled over this), then to wait another God knows how long for food that tasted like it was zapped in the microwave several times over that was served by a waiter whose answer to everything was a careless, “it is, what it is”. I guess since he already got his tip he figured he could respond anyway he wanted. The whole experience was lackluster to say the least. I wouldn’t go back here if they gave way free anything.

We also went to the movies. We paid to see Magic Mike but no one checked our tickets sooooo we could’ve in theory snuck in and saw it for free. Especially me since I fell asleep after 30 minutes. Don’t judge me…I was pregnant. Pregnant women will sleep anywhere if the chair is comfy enough. I finally saw the movie in full the next year on HBO. I didn’t fall asleep that time. I absolutely approve the making of a 2nd one and a 3rd..ok maybe not a 3rd. But I feel if Channing Tatum keeps signing up then they should keep making them.

But the BIG chatter that was surrounding this trip was talk about getting tats. Thankfully for yours truly I was exempt from this fun little activity due to the bun in my oven. I was looking on in awe as my girls just hopped in the chair to get some new ink and piercings. I was there for moral support but my eyes had other plans. So I napped. What else was I gonna do? It was too hot to leave the cool confines of the shop so sleeping was my only option, eating was another but it meant I would’ve had to leave the shop and that wasn’t happening.

Even though we were on a trip together there times we split up and went off to have different adventures. Me and Nicole (both of us on the left in the pic) went looking for a bank and ended up walking the long way there by mistake, and if it hadn’t been for the supermarket which at first glace we thought was a mirage we would have surely melted on the side of the road. On our way back we ran through as many office sprinklers as we could find to keep cool. It was in that moment we decided no matter how close our destination was we would to cab it.

The day before we were to leave I left the girls sleeping in the room and had breakfast alone and rented a bike, which you can do all over South Beach, for a 7am ride. I needed to beat the heat and the crowd. I rode as far and 30th and Collins all the way back down to somewhere around 1st and Ocean, around Washington back to the hotel. It was the most freeing experience I had in very long time, nothing but me, my thoughts and Sade in my ear. Even with your best girls time alone is very important.

But the best of the best was the night we decided we were gonna get up and go out. We walked around all day and went back to the room to rest. Well that rest turned into us waking up at 11pm. Four women in one room and sharing 1 bathroom trying get ready is as chaotic as one could imagine. We finally made it out of the room by 1am, which I think was pretty impressive and to our shock and horror everything was winding down. We were literally dressed up with no where to go. We went to Mango’s for an awesome live shows but those too were almost over and with the kitchen closed we were S.O.L. in terms of something to eat. Each restaurant we went to the kitchen was.. closed, closed, and closed. We settled on an all night pizza joint on 15th near Washington. We had the best night ever! After we ate we went back to the room, talked for a few and went back to sleep. Sleep was clearly an ever present theme of this whole vacay.

It may sound like we didn’t do too much of anything but that for us was paradise. It was freeing to not have to wake up at the crack of dawn, prep meals, wash clothes or answer a million and one questions. It was a trip that allowed us to have a moment to ourselves so that we could indulge in things that were for only for us. It was automatically deemed the best trip EVER and we are looking forward to planning the next one. Who knows maybe we’ll bring husbands or maybe even the kids, we haven’t decided yet.

(Due to the privacy of my girlfriends I have decided to not share pics from this trip…maybe next time.)